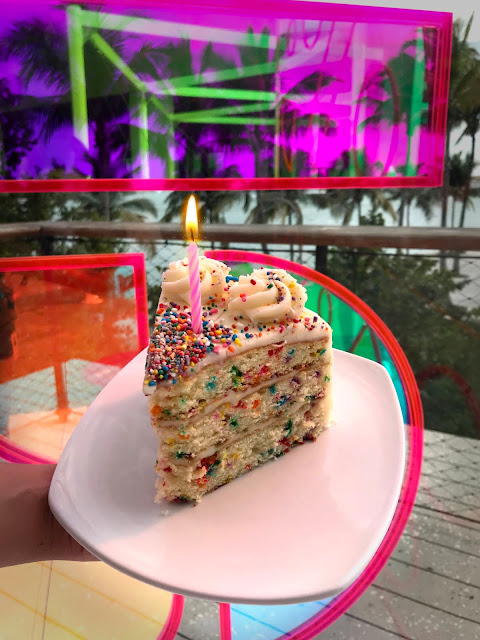 Sazoneros! Miami’s flagship art museum, Pérez Art Museum Miami (PAMM), is turning 35 so the museum will be celebrating on Thursday, February 7th (5:00 to 9:00 p.m.), with a Free Community Night called Our Birthday, Your Party! Guests will enjoy a live performance by Millionyoung, a DJ set by Ray Milian and figure drawing sessions. This event celebrates PAMM’s unique history as a collecting institution with an ongoing commitment to diversity, presenting art from Latin America, the U.S. Latinx experience and the Caribbean, while looking toward the African diaspora.

Don't miss your chance to take photos inside of PAMM’s recently unveiled PAMM Portal experience, which allows you to physically step into a colorful, oversized structure that was inspired by PAMM’s 35th anniversary logo design and created by Atmospheric Architect Stefan Von Fouts. The beautifully artistic acrylic plexiglass structure, which is perfectly positioned to overlook Miami’s Biscayne Bay, is made with dichroic film and changes colors when viewed from different angles and makes for an unforgettable photo opp. On the event day, the PAMM Portal experience will be outfitted to feature an immersive photo booth. From Center for the Fine Arts (CFA) to Miami Art Museum (MAM) to PAMM, for over three decades the institution has made a lasting impact on the city’s cultural history, helping make Miami the international art capital it is now while serving as inspiration for untold numbers of people across the entire spectrum of the South Florida community.

As you may know, the 25th annual Winter Music Conference is coming to Miami Beach starting this Tuesday, March 23rd till March 27th. To kick-off this exciting musical movement, Sushi Samba is relaunching their weekly event called "Cosplay Tuesdays" on March 23rd from 12 midnight till 4:30 am (600 Lincoln Road). This is the restaurant's biggest party night where acrobats and other fun characters come out to play!
This week's celebration will not only feature your sushi favorites, but guests will be treated to the AMAZING beats of Ursula 1000 (aka DJ Alex Gimeno). Gimeno's personal taste in music includes : new wave, post punk, glam rock and hip hop. This means you're in for some eclectic sounds and a much needed dose of sazon! Don't miss the party this Tuesday: it's the only night Ursula 1000 will be spinning. For table reservations, call 305.673.5337 or visit www.sushisamba.com. If you need more information on the Winter Music Conference, check out htt…
Read more

The 2nd Annual Family Builders USA Gala, Una Noche en Familia, took place this past Saturday, December 12th at the Hilton Miami Downtown. Prominent community leaders and celebrities attended the gala to support the foundation's social programs in Miami. After enjoying a lovely cocktail reception, guests were welcomed by the organization's President, Alfredo Santamaría. In honor of Mr. Santamaría, the Office of the Mayor of the City of Miami presented him with a Proclamation declaring December 12th as “Family Builders USA Day.” During the gala, Luifer Cuello was presented with an award for his extraordinary community service while Michael Bileca was named “Leader of the Year 2009.” The celebration concluded with a stunning fashion show featuring designer Samy Gicherman's Tango Collection. For more information regarding this organization or to learn about furture events, visit their website at http://www.familybuildersusa.org/.
Alfredo Santamaría and Tanya Charry Melissa Ma…
Read more

It's officially summer so I've decided to turn up the heat to muy caliente! Although our city is saturated with models, it's inarguable that Miami's own Francesca Frigo is making big moves in the modeling industry and bringing sexy back while doing so! Born in Puerto de la Cruz, Venezuela, Francesca first moved to Miami to attend college and later decided to pursue a modeling career. After Playboy Magazine named her the official Miss August 2010 Playmate, life has taken her on an incredible journey around the world. In my special interview with Frigo, you'll get the inside scoop on her upcoming projects, her role with DECOBIKE on South Beach and her beauty secrets. Let's get this heat rising! Oh, make sure you watch Francesca add her Playboy spin on the classic Nike commercial starring Mars Blackmon and Michael Jordan at the bottom of this post.
MBS: How did you begin your modeling career and what inspired you to enter the industry? [Picture above courtesy of Wi…
Read more