Showing posts from June, 2013
Show all

June 16, 2013
Sazoneros! On Saturday, June 15th, I had the pleasure of attending one of my favorite charity events at Jungle Island. The 2013 ING Miami Celebrity Domino Night is an annual fundraising event that benefits Amigos For Kids. Amigos for Kids is a Miami-based nonprofit organization that aims to prevent child abuse and neglect by valuing children, strengthening families and educating communities. The evening featured celebrity domino players, bar courtesy of presenting sponsor, Bacardí USA, and a silent auction featuring the original artwork for this year’s painting by Carlos Navarro, “Conga y Domino.” During the evening, I ran into celebrities and local movers and shakers like Cesar Conde (pictured on the right), President of Univision Networks, and his wife, Pamela Silva Conde, six time Emmy award winning journalist and co-anchor of the Univision Network’s, “Primer Impacto.” Emilio Estefan, Charytín, Jorge Plasencia (co-founder of Amigos For Kids) and Lili Estefan struck a pose on the or…
Post a Comment
Read more 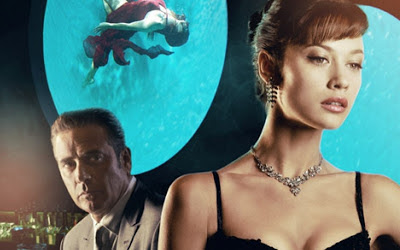 Sazoneros! My favorite STARZ Original Series, Magic City, is finally back for a second season of tantalizing drama and incredibly good looking characters. Season two of Magic City will premiere on STARZ on Friday, June 14th, at 9 PM.The acclaimed television show, set in Miami Beach circa 1959, will transport viewers to Cuba this season so get ready for an nteresting ride through history. To celebrate the return of the series, W South Beach Hotel & Residences is partnering with STARZ to provide viewers with a real oceanfront luxury hotel experience that will make you feel like you're on the set of Magic City! The Magic Citypackage is available for purchase at W South Beach from now through August, for stays until December, 2013. Guests will be invited to revel in the sexy decadence of life as a Miami Beach hotelier with rates starting at $429/night. The Magic City package includes the following: