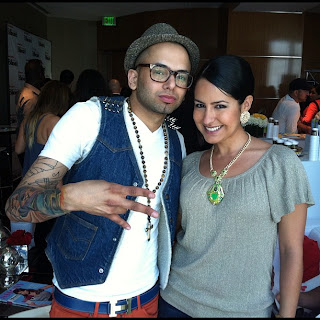 Sazoneros! You've been hearing a lot of buzz about tonight's Billboard Latin Music Awards right? Well, the big show airs tonight, April 26th, on Telemundo starting at 7 p.m. (EST). During my visit to the Billboard Latin Music Conference yesterday at the JW Marriot Marquis Miami, I had the opportunity to meet and interview one of my favorite Latin artists, Sensato! The Dominican born Sensato Del Patio was raised in the Bronx but has quickly made his mark in the music industry after his mainstream introduction in August 2009 with his smash hit “Watagatapitusberry.” If you don't know what that word means, that's the whole point of the song! It's a catchy phrase which left fans wanting more of Sensato's crazy cool lyrics and his unique hip hop twist. For all of my music lovers out there, you'll be happy to know that Sensato will be opening tonight's Billboard Latin Music Awards with Mr. Worldwide himself, Pitbull. Check out my interview below:


MBS: Are you excited about opening the Billboard Latin Music Awards and what are you most looking forward to during the show?
Sensato: Well, I'm very happy and I'm feeling very blessed to be here in Miami for the show. It's going to be a big show tonight. Pitbull and I will be performing "Crazy People" so you know we're going to shut it down for all the crazy people out there! 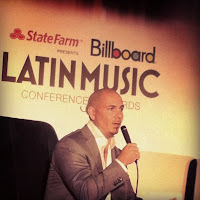 MBS: Why did you want to collaborate with Pitbull (pictured on the left) on the song you'll be performing tonight?
Sensato: I think Pitbull is someone to look up to in this industry. He's a Cuban from Miami that made it in the hip hop game and now he crossed over to Mr. Worldwide! I couldn't get a better feature for a track like "Crazy People."

MBS: Where do you most enjoy performing: an intimate lounge or during a tour concert?
Sensato: A performance during world tours. It's an experience that you really have to live it to know what it feels like. I love being on the bus, going from city to city and performing inside different arenas. Luckily, I had the opportunity to go on tour with Pitbull. We recently performed "Crazy People" and "Latinos in Paris" in Canada which was a great experience for me.

Thanks for showing Miami love Sensato! Rock out tonight!!!