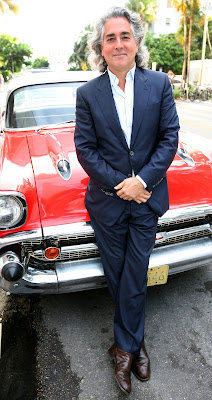 Miami is getting sexier by the minute! On Sunday, March 4th, I attended the Miami International Film Festival's premiere event at The Colony Theatre for "Magic City," the highly anticipated original Starz series. This thrilling show will take you back to 1959 while giving you a glimpse into the life of Ike Evans (portrayed by Jeffrey Dean Morgan) who owns the luxurious Miramar Playa Hotel. It’s a tumultuous time in Miami and abroad as racial and religious segregation are at their pinnacle in the U.S., while 90 miles away in Cuba, Castro’s rebels are closing in on Havana. Regardless, Miami is still THE place to be and the Miramar Playa is where all of the drama unfolds! During Sunday's event, I had the pleasure of meeting Mitch Glazer (pictured above; Photo by Nathan Valentine/ Starz), the show’s creator/executive producer and Miami native, who was extremely proud to represent his hometown and present this new series to his colleagues. Check out my pictures from the red carpet below and make sure to watch the debut of “Magic City” on Friday, April 6 at 10 pm ET/PT, exclusively on Starz. Trust me, you will definitely want to watch all 10 episodes of this show. Let's just say there's a whole lot of sexy tanning scenes, romantic story lines and glamorous parties to keep your eyes on. 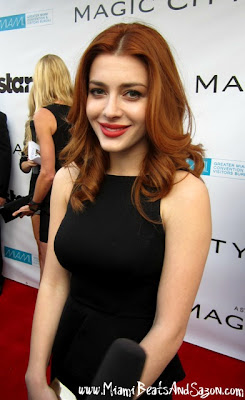 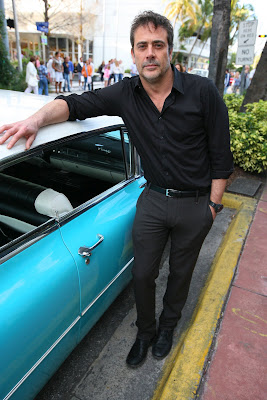 Above Left: The beautiful Elena Satine (plays Judi Silver on Magic City) on the red carpet. Above Right: Jeffrey Dean Morgan (plays Ike Evans; photo by Nathan Valentine/ Starz) arrives at The Colony Theatre on Lincoln Road. If you can't wait another month till the premiere of Magic City, here's a little taste of the action! 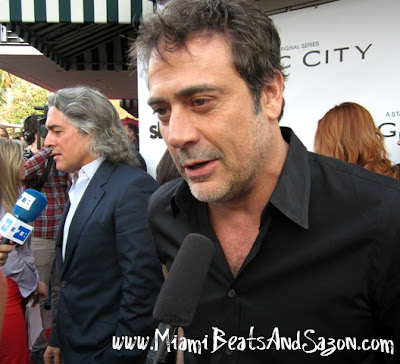 A close up of Jeffrey Dean Morgan working the red carpet! 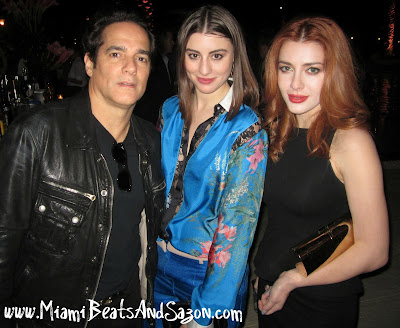 Above: Magic City cast members Yul Vazquez, Dominik Garcia-Lorida (Daughter of Actor, Andy Garcia) and Elena Satine striking a pose for Miami Beats and Sazon during the after party at the Raleigh Hotel on South Beach. The poolside party featured a live Cuban band and a spectacular reunion of the show's cast and crew. Overall, watching the pilot episode of "Magic City" was an incredible experience. As a Miami native, it was interesting to see how life was different "back in the day." Since I fell in love with the glamour inside the Miramar Playa Hotel, I thought I'd share how Magic City became one of the largest sets ever built in Florida.