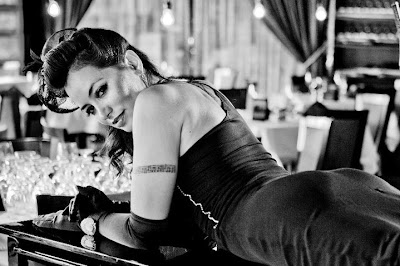 Miami is known for its rich diversity. I love sharing the success of local artists who embrace this city and transform it into an art form. Montserrat Franco (pictured above; photo by Gary James) is a singer who I previously featured in my Betty Boop Cabaret Series post. Today, Montserrat's musical career is quickly flourishing with the release of her first album titled "La Gatica" which was produced in Miami by Kiki Sanchez. “La Gatica” definitely brings listeners a new tropical sazon. After collaborating with Trinidad and Tobago’s artist “Terra B,” this album will make you want to dance! Montserrat also joined forces with Gloria Estefan’s guitarist Marco Linares who adds his amazing touch to the album. If you're looking for an international integration of music, check out “Se Stasera Sono Qui.” This song blends the classic Italian song on an unexpected samba arrangement. Talk about eclectic! To purchase her CD, visit online retailers like Itunes, Napster, Amazon, Rhapsody, Ilike and Reverbnation. Best of all, part of the proceeds from Montserrat’s new album sales will benefit Miami based foundation Common Ground for Conservation, a non-profit organization that helps protect Mother Earth and educate on sustainability. To learn more about Montserrat Franco, find her on MySpace, follow her on Twitter, become a fan on Facebook and visit www.montserratfranco.com. Meet Montserrat on the set of her video for "La Gatica"!