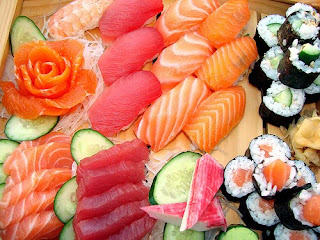 Attention sushi lovers and big eaters! On Wednesday, March 31st, RA Sushi in South Miami is hosting its second annual MAKI MADNESS. This sushi-eating contest is open to the public and will take place from 6:00- 9:00 p.m. MAKI MADNESS competitors will have to eat two RA Sushi signature Tootsy Maki (crab mix, shrimp and cucumber topped with tempura bits) in the fastest amount of time during the first round. The final six competitors will compete in the championship “sushi showdown.” During this final round, opponents will eat as many Tootsy Maki as they can in 2 minutes. The grand prize eater will receive free sushi for a year!!! MAKI MADNESS is limited to the first 30 entries. Applications are available at RA Sushi in South Miami, 5829 SW 73rd street (across from The Shops at Sunset Place). The deadline to register is Monday, March 29th and all eaters must be at least 18 years old to participate. Registration to compete includes a $10 entry fee (cash only) which will be donated to Radio Lollipop® at Miami Children’s Hospital.

Volunteers also visit children at their bedside to play games, read books and encourage them to participate in the radio broadcasts to win prizes. My sister (pictured on the right) and I were actually DJ's at Radio Lollipop when we were in high school. I remember how our radio shows made the children happier and forget that they were sick. There's definitely a magic spark in that station so help cheer up a hospitalized child by donating today. For more information about Radio Lollipop in Miami, visit http://bit.ly/9hH9i6. Let the sushi games begin!
DJ Laz England Maki Madness Miami Children's Hospital RA Sushi Radio Lollipop South Miami