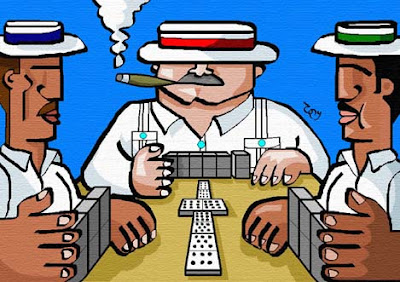 If you grew up in Miami, then you know of the game which makes every grandfather stay up late at night until a winning team has been proclaimed at Abuela's house! The game: DOMINOES. Domino games are not only present in our neighboring Caribbean islands, but the game has actually been traced back to ancient kings. The oldest known domino set was found in Tutankhamen's tomb, among the ruins of Thebes. Tutankhamen was king of ancient Egypt in the 18th dynasty (1355 BC) and his surviving set is now in King Tutankhamen's Museum in Cairo, Egypt.

Now that you know about Dominoes, here is an upcoming event that aims to continue the legacy of this historic pastime while raising awareness for an important cause. Amigos for Kids, a mainstream nonprofit, is hosting their annual fundraiser called "ING Miami Celebrity Domino Night." Amigos for Kids was founded 18 years ago to respond to the diverse needs of South Florida's abused, neglected and less-fortunate children as well as their families. Today, the organization is best known for the help they provide to these families through education, abuse prevention and community involvement. If you're interested in attending the Amigos for Kids celebrity domino event, then mark your calendars for June 19, 2010 (Jungle Island at 7:30 p.m.). The fundraiser features live music, dancing, silent auction and of course, domino playing. Tickets cost $150 in advance, $175 at the door or $1,000 if you wish to reserve a domino table.

How can you become involved? Get acquainted with Amigos by attending a free kick-off event for their "ING Miami Celebrity Domino Night" on Thursday, March 25th. Meet the members of this organization and familiarize yourself with their cause. The party will take place at Mia at Biscayne (20 Biscayne Blvd; where Biscayne meets Flagler) from 6:30- 9:30 p.m. You must RSVP by Tuesday, March 23rd because space is limited (call 305.279.1155 or send an email to rsvp@amigosforkids.org). Silence is a form of consent. Get involved and never be silenced in support of our most precious gift- children. For more information on Amigos for Kids or any of these events, visit http://www.amigosforkids.org/.
Amigos for Kids Cairo Domino Egypt ING Miami Celebrity Domino Night MIA at Biscayne Tutankhamen