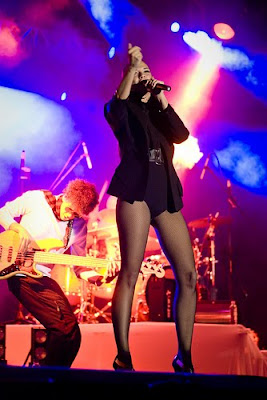 La 5ª Estación, aka La Quinta Estación, is playing at the Fillmore Jackie Gleason Theatre on Thursday, January 14th, at 9:00 p.m. The Spanish pop/rock duo features lead singer Natalia Jiménez and guitarist Ángel Reyero. In 2002, their first album gained popularity in Mexico because their song (¿Dónde Irán?, "Where will they go?") was chosen as the theme song for Clase 406, one of the most popular telenovelas of Televisa. After touring Mexico to promote this album, they decided to stay permanently. Originally from Madrid, the musicians won the Latin Grammy Awards in 2006 and 2007 for "Best Pop Album." Their fourth studio album (March 2009), Sin Frenos, was labeled Gold. Don't miss your chance to see them LIVE! Tickets are available on Live Nation: http://www.livenation.com/edp/eventId/412953. To read more about La Quinta Estacion, visit their official website at www.laquintaestacion.com.mx. Enjoy the show!
Fillmore Jackie Gleason Theatre La Quinta Estacion Live Nation Madrid Mexico Televisa